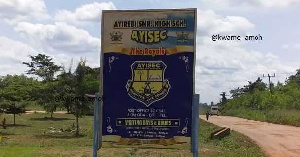 According to a report GhanaWeb received from an unidentified person, the accused persons were caught while transporting the food items to Anyinam-Bunso in the Eastern Region.

Among the items listed in the report were bags of beans, gari, maize and other provisions.

“Last week after a long monitoring and surveillance by the BNI, the town folks, students and sections of the school staff have caught the school bursar, Mr. Emmanuel Kweku Frimpong (a.k.a Apess), Mr. Ernest Osae Botah, storekeeper, the school driver Dominic Asare. They were caught with bags of beans, gari, maize and other provisions meant for the students. These items were transported to Anyinam-Bunso, Eastern Region where the storekeeper hailed from,” the report alleged.

The BNI and the police are handling the issue, the report added. The Ghana Education Service, Ministry of Education and the police service have been charged to bring the perpetrators to book.

Confirming the incident to GhanaWeb, the Parent Teachers Association chairman of the school, Harrison Titomeh, said the incident was brought to his attention last week when it emerged that the suspects had been sent to the Ayirebi police station for their statements to be taken.

The PTA chairman confirmed in the interview that the Regional Education Directorate, about a month ago, ordered the transfer of Dominic Asare from the school on the grounds of indiscipline and theft.

However, one Emmanuel Nkansah purporting to be working under the orders of the Member of Parliament for the area, Kojo Oppong Nkrumah, is reported to have ordered the school driver not to honour the transfer, insisting that the MP had asked him to come and handle the matter.

“We’ve been receiving information that some people in the school steal food items belonging to the students. Inhabitants of the region tell us that the kitchen staff are also among those involved in the theft. The Regional Director and other stakeholders were kept in the known about this issue…We, together with the headmaster called the kitchen staff and informed them the rumours in town and also advised them to put an end to it if it’s true…”

“I heard that the bursar, Emmanuel Frimpong, storekeeper and driver – Dominic were arrested. Later, the BNI took their statements…Before this, Dominic was transferred on the grounds of indiscipline and theft but he didn’t leave… According to the information I have, the guy called Dominic Asare is a notorious driver. As soon as they load the vehicle with the food items, he’s there to transport it.”

The PTA Chairman however emphasized his doubts about the supposed endorsement of Mr Oppong Nkrumah for the activities of Emmanuel Nkansah who is known to use the MP’s name to derail any form of action taken against the perpetrators.