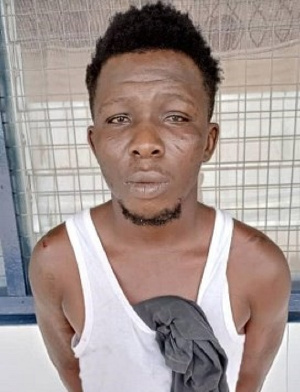 The Upper East Regional Police Command has arrested two brothers suspected to be robbers in the Bolgatanga Municipality.

The suspects, Ayine Awunnore, also known as Agu King, aged 27 and Daniel Awunnore, 20 years were alleged to be involved in a robbery incident on December 28, 2020, at Bukere, a suburb of the Bolgatanga Municipality.

A signed statement issued by Assistant Superintendent of Police (ASP) David Fianko-Okyere, the Public Affairs Officer of the Command, indicated that the brothers attacked their victim, snatched his motorbike and mobile phone and went into hiding in 2020.

According to the statement, on September 28, 2021, the Regional Surveillance Team of the Command, based on intelligence, arrested the suspects at their hideout at Winkongo in the Talensi District of the Region.

It said the suspects were identified after they used their victim’s mobile phone to make a call and subsequently went into hiding as police pursued them.

It said a similar, search in the room of suspect Daniel Awunnore led to the retrieval of 27 rounds of pistol ammunition, one return spring, nine assorted brand new mobile phones and cash of GH¢250.00 all in a bag.

The statement further added that one black cable whip, four memory cards and one royal motorbike with registration number M-21-AW 2507 and chassis number: BLB7GJC5AXMFR12480 were found.

The Command entreated members of the public, especially residents of the Region to visit offices of the Regional Criminal Investigations Department (CID) located at Damweon on the Bolgatanga-Tamale Highway, to identify the suspects or their valuables.

The statement noted that the items would be kept as exhibits for evidential purposes.