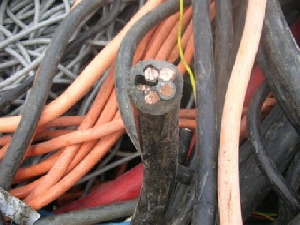 A notorious cable thief believed to be in his early 40’s has been arrested at Pershie, a suburb of Elmina in the Komenda Edina Eguafo Abirem District of the Central Region.

Reports gathered by Starr News indicate that in an attempt to steal the cables belonging to MTN at their cell site, residents in the area grabbed him and tied him on a electricity pole to be lynched.

The suspect who only gave his name as Joe Mensah is noted to be a serial cable thief who has been stealing from various MTN cell sites within Elmina and its environment.

He was previously reported to have engaged in cutting cables belonging to some of the radio stations in the area and since then has been on the Police wanted list.

In an interview with Starr News, the suspect said he works with MTN which was later revealed to be untrue.

According to him, he decided to cut the cables in order to earn a living, but unfortunately, he was caught and nearly lynched.

He appealed to the public to forgive him but since that was not the first time he was caught stealing cables, they ignored him and brutalized him severely before calling the police.

Speaking with one of the residents who apprehended him, he said “I heard a noise at the cell tower around 2 am and decided to go and check what was happening only to see him cutting out the cables and when I questioned him, he said he has been sent by MTN to come over and work on a fault.”

He added, “unconvinced with the answer given by the suspect, I started raising an alarm which prompted the thief to run. But around 5 am Tuesday morning, the suspect came back to pick up his tools and the cables he had already cut and this time he was chased, caught and tied to the metal bars around the tower till daybreak before he was sent to the Elmina District police for further investigation.”

The suspect is currently in police custody at Elmina but the police has assured the general public they will arrest whoever is assisting him in these acts.