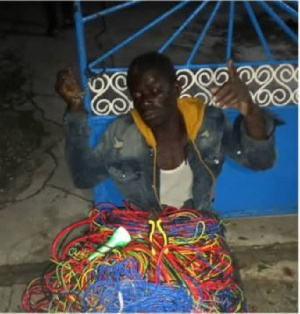 A cable thief has been arrested at Akyem Osiem by residents and handcuffed to a building awaiting the arrival of the police.

The suspect who identified himself as Kwaku Abu was pursued and arrested at about 2:00 am Sunday by some residents of the Saviour community carrying quantities of stolen copper cables packed in a sack.

He, however, claimed he stole the items from Akyem Apedwa and was going to sell them at Koforidua but he did not have money to continue the journey.

He was handcuffed to a building throughout the night and expected to be handed over to Akyem Osiem Police.

A few suspects arrested in the region were established to be electricians by profession.