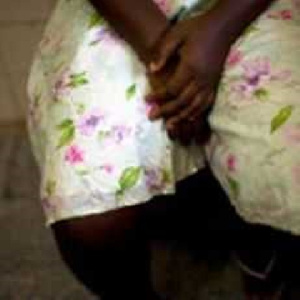 Francis Avugla, a carpenter, who allegedly inserted his fore finger into the vagina of a seven year old girl several times at Kwabenya, has appeared before the Adentan Circuit Court.

Charged with indecent assault, Avugla has pleaded not guilty.

The Court presided over by Madam Sedinam Awo Balokah has admitted Avugla to bail in the sum of GH¢200,000 with four sureties one to be justified.

The Court ordered that the sureties should be known to the Police.

Inspector Gloria A Ayim, who held brief of Supt. Patience Mario narrated that Avugla is a carpenter residing at Kwabenya in an uncompleted two storey building.

Inspector Ayim said on July 30, this year at about 4:00 pm the victim attended natures call in accused person’s house.

Prosecution said while the victim was leaving, Avugla lured the victim and put her on the floor of the uncompleted two storey.

The Prosecutor said accused removed the victim’s underpants and inserted his fore finger into her vagina several times.

Prosecution said after the act, the Avugla asked the victim to buy him sachet water.

Later a neighbour saw the victim standing by a public toilet washroom bleeding, the Prosecutor said.

Prosecution said accused was arrested and sent to the Domestic Violence and Victims Support Unit where a Medical report form was issued to complainant to seek medical care for the victim.

Source: GNA
Related Topics:BAILcapenterminorsexually
Up Next

Unidentified man murdered and dumped in a gutter