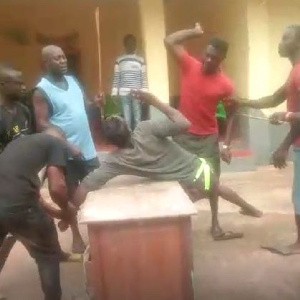 A Magistrate court in Enchi in the Western North Region on Thursday, August 22, 2019 has sentenced six men who mercilessly flogged a young man recently for allegedly flouting the chief’s orders to 40 days imprisonment with hard labour.

The convicts, Bullu Adjei, Alfred Ban in Obboye, Kwasi Kah, Stephen Tando, David Amankwah and Nana Adu are also to pay a fine of GHC1,200 each to the court, failure of which they will serve an additional 90 days each.

The court presided over by His Worship Eric Baah Boateng further ruled that the convicts should compensate the victim, Stephen Koomson with GHC1,000 each for the pain caused him.

The court action comes on the back of a complaint made by the victim against the men to the Enchi Police, following which they were arrested.

After investigating the matter, the Police found the perpetrators culpable and therefore arraigned them before the court for prosecution.

They have begun serving their term at the Tarkwa Prison.

It would be recalled that a video of a young man being beaten by four men for allegedly flouting the directives of the Chief of Enchi went viral on social media a fortnight ago.

He was said to have been flogged on the others of the chief, Nana Beyeeman Tano Kwaw Benhuin III, but that assertion has been denied by the Elders of the town who claimed the action was not sanctioned by the Chief as he had no knowledge of it.

The viral video was met with huge public outrage as many condemned the violation of the victim’s human rights.

A 36-year-old man, Kofi Klutse has been arrested for allegedly possessing a foreign pistol after … 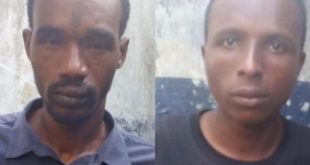