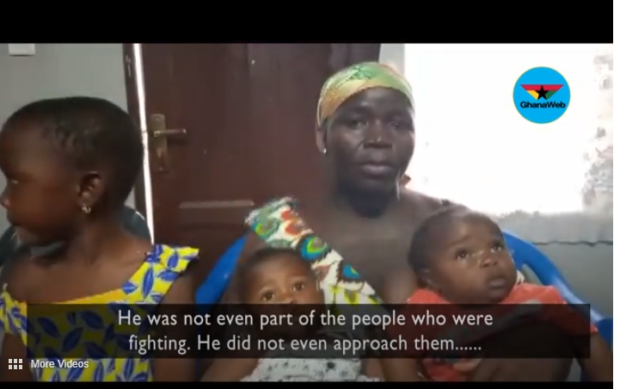 There is a mounting insecurity at Kpodoi-Dorfor in the North Tongu District of the Volta Region as father of a six-month-old twins has been shot to death by assailants over chieftaincy dispute.

The 34-year-old deceased farmer, Azievu Obeneh, who was shot dead at the premises of the Ananzie Chief’s palace at Kpodoi, left behind a set of twins and a seven-year-old girl as well as an unemployed wife who has been pleading for justice.

Mother of the twins and wife of the deceased, 27-year-old Xorla Toglo, told GhanaWeb in an interview that, it is difficult to fend for her family and having nowhere else to go and no one to cater for her and the children.

She appealed to the government to urgently intervene and to as well let justice prevail in her late husband’s matter.
GhanaWeb gathered that another farmer, Kofitor Ananzie, was also shot but luckily survived the gunshot.

Another 63-year-old farmer, Amatey Adjawutor suffered machete wounds on his way home from the farm by the same known assailants.

Amatey is said to have lost his sight and currently half deaf due to the gun shot and the machete inflicted wounds meted on him.

Residents say they are living in fear as almost every two days, the gun wielding assailants pounce in on them to threaten them.

Information gathered by GhanaWeb suggests that a chieftaincy dispute between factions of the Ananzie Stool has led to the rising insecurity in the Kpodoi-Dorfor community.

The information further suggests that the perpetrators seem to be going round the community threatening residents with gun as well as trying to force on the community, a regent who has been alleged to be alien in Kpodoi-Dorfor.

The perpetrators are, however, said to be walking freely in Kpodoi and continue to subject the residents to fear with impunity even after allegedly shooting and killing one person.
According to the Assembly Member of Kpodoi-Dorfor, Bright Awuitor who spoke to GhanaWeb, security personnel appear to have been overwhelmed by the situation.

“The situation at Kpodoi now is becoming on becoming. Me myself I can’t hold meetings in the community now because my life is in danger and we don’t know what else to do.
“We are appealing to the government to come to our aid. We are begging the government.
“Kpodoi used to be the life of Dorfor. We use to enjoy peace. But nowadays, I don’t know what to say. We want peace to prevail in Kpodoi so that developmental projects being carried out by the government can come to pass here,” he expressed.

Information suggests that the Chief of Ananzie, Togbi Sedem Ananzie Kpitriku 11, who in efforts to bring order in the community, spent money to build a police post for the Ghana Police Service to provide personnel for the post but that effort has been crippled.

The Chief accused the DCE for North Tongue, Richard Collins Arku, of allegedly giving room for the insecurity to fester in Kpodoi.

“In my reign as chief of this area for the last three to four years, I have tried my best to bring development in this town.

“Extension of electricity, school, hospital, a lot. In fact, chieftaincy is without issues. But we can allow unity to continue. Misunderstanding will not bring development.

“I have personally appealed to the police administration to setup a police station here. I have built a temporary structure here to be used as police station but the DCE and a certain soldier have stumped their feet on it,” he told GhanaWeb.

The chief called on President Akufo-Addo and the Inspector General of Police to come to the aid of Kpodoi.
Meanwhile, when GhanaWeb contacted the DCE, who is the Chairman of the District Security Committee (DISEC) for his side of the story, he said everything was under control at Kpodoi-Dorfor.

The DCE, Richard Collins Arku, told GhanaWeb that “that issue came to DISEC and we have taken a decision on it.”

“That issue has been with us for some time now. The police are on top of their game. They are doing their best. So no cause of alarm. So (be) rest assured ok,” he said.