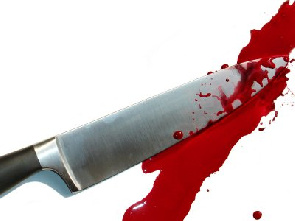 Footballer stabs seamstress in the breast

Although he probably thought he had been set free after allegedly stabbing the breast of his victim, a self-styled footballer at Ashongman Estate, a suburb of Accra, has been re-arrested following a directive issued by an Accra Circuit Court.

According to the Prosecutor, Inspector Samuel Ahiabor, Kwabena Akiti, 23, was set free last year as the case was struck out by the court for reasons that the complainant was not forthcoming in pursuing the case.

However in March this year, the complainant, he said, showed interest in the case, informing the decision of the court, presided over by Mr Aboagye Tandoh to re-arrest Akiti.

Akiti pleaded guilty to the offence of causing unlawful harm and robbery as he is said to have not only pulled a cutlass to inflict a deep cut on the right breast of the victim but also damaged her wrist and robbed her of a mobile phone valued at GH¢1,000 and an amount of GH¢550.

Inspector Ahiabor told the court that the complainant, a human resource person, was a biological sister of the victim who was also a seamstress.

He said both the complainant and the victim, including the accused, were all residents of Ashongman Estate in?Accra.

He said on July 31, 2017 at about 9 p.m., the victim had closed from work and was standing in front of her door while searching for her key in her bag when Akiti approached her and demanded for her handbag.

Prosecution said the victim, who was already frightened, handed over her handbag but Akiti was not satisfied and went ahead to pull out a cutlass and inflicted a deep cut on her right breast.

Inspector Ahiabor said Akiti further cut the wrist of the victim, and as a result she shouted loudly, attracting neighbours to the scene.

Akiti was consequently given a hot chase but he managed to escape. A complaint was, however, lodged at the police station, leading to his arrest.
Prosecution said the victim is still at the 37 Military Hospital responding to treatment.