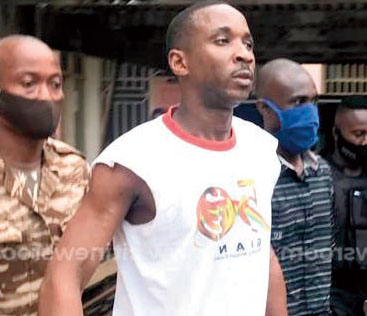 The Chief State Attorney Prosecuting the case involving the kidnapping and subsequent murder of the four girls in Takoradi revealed yesterday that photographs of a human skull and some bones were found in the gallery of the tablet retrieved from Samuel Udoetuk Wills, the first accused person in the case.

Mr. Wills, who has been charged alongside John Oji, opened his defence at the Sekondi High Court on Monday, led in evidence by his counsel, George Essiful-Ansah.

Mr. Wills and Oji, both Nigerians, are being tried in connection with the disappearance of the four girls, who police later said had been killed.

The victims—Ruth Quayson, Priscilla Blessing Bentum, Priscilla Koranchie and Ruth Abekah—were believed to have been kidnapped between August 2018 and January 2019, and the police subsequently said some skeletal remains they found in Takoradi were that of the girls.

The Chief State Attorney, Patience Klinogo, who was cross examining Mr. Wills, yesterday asked the accused person, “The tablet is yours and you have the photo of yourself and your friend, Paapa, as the wallpaper?” and the accused said “yes.”

She continued, “In the gallery, you have the picture of your girlfriend, Emily Alimo,” and Mr. Wills answered in the affirmative.

The Chief State Attorney asked again, “You also have pictures of human skull and some bones in the gallery,” and the prosecutor, went on to show the picture of the bones and the human skull on the accused phone, which was an exhibit in court, to him in the witness box.

Mr. Wills initially said he knew nothing about the picture but later said it was an art work.

The Chief State Attorney asked about another photograph found in the gallery of the accused person’s phone which was a pregnant woman with a baby sticking out of her abdomen with blood oozing all over her.

However, the lawyer for the first accused person, Mr. Essiful-Ansah, stood up and objected to the question.

He explained that the pictures were not part of the evidence and that he should have been given a copy for his reaction.

However, the court overruled the objection and explained that the exhibit was in evidence with all its content.

Answering the question, the accused person said he did not have such picture on his phone and did not know how it was saved on his phone.

He said the gadget had been in the custody of the police since he was arrested.

The accused person then told the court that statements he had given to investigators in the case were given under duress.

The Chief State Attorney pointed out to him that in one of his statements he stated that it was his friend, Mr. Oji, the second accused person, who conspired with him to kidnap two of the missing girls—Ms. Bentum and Ms. Quayson; saying, “So I put it to you that your assertion that you knew only two of the missing girls and did not know Ms. Qusyson is false.”

The first accused person answered “I disagree with you.”

“You also mentioned in your statement that you had a record of kidnapping in Nigeria before coming to Ghana,” the prosecutor asked but the accused person replied “I said that under duress.”

The State Attorney continued, “You said in your statement that between January and February 2018, your friend Mr. Oji was calling to discuss kidnapping issues with you. You also said the second accused person visited you in 2019 and introduced the kidnapping business to you. I put it to you that in your statement you said the second accused person asked you to arrange some girls for him and that he would pay you GH¢50,000 each.”

He again responded that “I said all that under duress.”

The State Attorney questioned the accused again, “You also stated that the second accused person after visiting you, went to a drinking spot with Ms. Bentum and he later told you he had kidnapped the girl?”

Mr. Wills again answered that “I said all that under duress”

The audience in the courtroom who were stunned with the answer could not help it but to burst into laughter.

The judge then asked Mr. Wills, “What is the meaning of under duress?” and he replied that “I was tortured to give those statements.”

One arrested at KIA over fake Covid-19 test