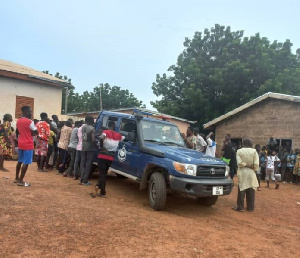 The Kintampo Police in Bono East Region have re-arrested a robbery and kidnapping suspect, Ali Igudu, who escaped from the exchange of gunfire with officers from the Police Intelligence Directorate at the Bole District of the Savannah Region.

According to information from the Kintampo Police, they gathered intelligence that suspects Ali Igudu, aged 50, of Sawla in the Savannah Region who escaped from police with gunshot wounds after an exchange of gunfire with Police at the Bole District was on his way to Kintampo Municipal Hospital for treatment.

The Police tracked him and recaptured him at the said Hospital’s emergency ward where he had been brought for treatment.

The suspect was met in a critical condition with gunshot wounds on his chest and and under his left armpit, he also had a wound on his forehead and some bruises but, could hardly talk.

The Police said upon interrogation in the Hospital, he indicated that he was attacked by a group of people in his house at Sawla in the Savannah Region and shot at and that two of his family members had died in the gun attack.

When the suspect was questioned as to why he was rather attending Kintampo Hospital but not any other hospital in the Savannah Region, he could not give any tangible reason.

His picture was therefore taken and crosschecked with the Police Intelligence Directorate, Accra where he was confirmed to be among the suspected armed robbers and kidnappers who had earlier on engaged Police in a gun battle at the Bole District in the Savannah Region.

The suspect’s condition was deteriorating as such the Kintampo Hospital Authorities referred him to Holy family Hospital, Techiman for further treatment.

Ali Igudu has since been sent to the said facility under armed guard and the Director-General PID has been informed accordingly.

The Ghana Police in a report said officers from their Intelligence Directorate escorting two suspected armed robbery suspects to a location of other armed robbery accomplices hiding weapons near Bole in the Savannah Region exchanged fire with the suspects after accomplices of the suspected Armed robbers opened fire on the police while on a footpath to retrieve some weapons.

The police said they returned fire and in the process, bullets hit suspects from Sawla called Iddrisu and Dramani Iddi who fell and bled profusely and later died at the Jemma Hospital in the Bono East Region.

The other suspects including suspect Ali Igudu however managed to escape into a nearby bush.