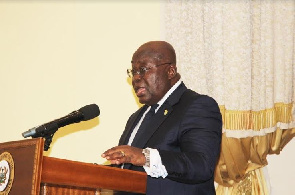 President Akufo-Addo is confident the court will bring finality to the case involving the murder of army officer Maj. Maxwell Mahama who was lynched at Denkyira Obuase while performing a national duty in 2018.

Fourteen people are standing trial for the killing but it’s unclear when the court will pass judgment.

Addressing a durbar of officers and men of the Ghana Armed Forces in Burma Camp, President Akufo Addo commended the army for their high sense of discipline during the period of the killing.

“I know in the face of provocation the Ghana Armed Forces displayed a great sense of discipline, maturity, and resilience. They ensured that there were no reprisal attacks or retribution against the community whose members perpetrated this dastardly act.

“You earned your badges as a highly disciplined institution and I know some of you may be frustrated at the slow pace of justice delivery in this matter. But as the saying goes and I quote ‘the wheels of justice turn slowly but grinds exceedingly fine.” I’m confident that those who are responsible for the killing of Major Mahama will face the full rigours of the law and suffer the penalty for it.” The President added.