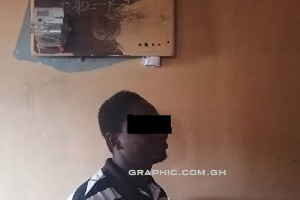 A 35-year-old unemployed man, Mr Ebo Larry, has been arrested by officials of Power Distribution Services (PDS) at Tafo Mile 3, a suburb of Kumasi, for stealing power over the last two years.

He allegedly reconnected his electricity mete after he was initially disconnected for owing electricity bills.

Despite persistent moves by the company to retrieve the money, Mr Larry has been evasive until his arrest.

Indeed, the action of the power distribution company followed information by his co-tenants to the company for his arrest.

Briefing Graphic Online at the Tafo Police Station after the arrest, a senior artisan of the Airport Station of PDS, Mr Dominic Ogurah said Mr Larry was arrested during a routine check after a complaint by one of his co-tenants.

His wife is said to have attempted to disconnect the power when she saw the officials of PDS.

She was, subsequently, invited together with the husband, Larry, to the station but they failed to honour the invitation.

The couple were later picked up at night and sent to the police station.