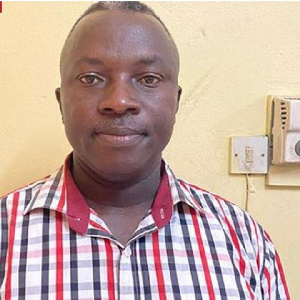 The Western Regional Command of the Ghana Immigration Service (GIS) has apprehended a 53-year-old man for an alleged recruitment fraud.

The suspect, Kojo Sakyi, was arrested on May 25 for allegedly defrauding unsuspecting and desperate Ghanaians of various sums of money under the pretext of getting them recruited into the GIS.

According to the Regional Public Affairs Officer of the GIS, Assistant Inspector Moses Manford Akakpo, the team of officers from the intelligence and the enforcement units carried out the operation.

He said they had to trail the suspect for three days before finally arresting him at AGIP, near theTakoradi Jubilee Park.

He said the suspect had lured one of the victims to the said location, with the intention of taking a sum of GH¢5,000 from him to seal the deal.

“This was after the victim had forwarded his certificates and other relevant documents to the suspect’s WhatsApp number – 0540520459”. He added that the officers had put the suspect under close surveillance which enabled them to arrest him when he had just received the money and was about to bolt.

He revealed that the suspect admitted the offence in his caution statement indicating that he had defrauded a number of unsuspecting youth.

“Further investigations revealed that the suspect had standard fees or charges for each category of prospective officers. He charged GH¢5000 for cadet officers and GH¢3,500 for recruit officers,” he said.

He disclosed that the suspect had since been referred to the National Headquarters of the GIS for further investigations.

He cautioned the general public to be on the lookout for such criminal elements and seek useful information that could lead to their apprehension.

A release signed by Asst. Ins. Akakpo stressed that the GIS was currently not recruiting and that all such social media platforms or publications should be disregarded and treated with the contempt they deserved.

“The service has the newspapers and the GIS website as its traditional mediums through which advertisement for recruitments are communicated to the general public,” the release added.

“The command is by this release re-echoing for the information of the general public that GIS does not have assigned agents, social media platforms or mobile money accounts through which such recruitments are made,” it said.

The statement also appealed to the public to continually be on the lookout for such criminal elements within the society and report their conducts to the appropriate quarters for their immediate arrest and prosecution.

Related Topics:FAKE RECRUITMENTRECRUITMENT
Up Next