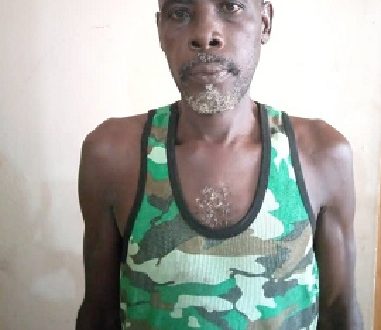 The Asante North Police Command have   arrested a 55 year old Man identified as Joseph Yaw Peprah for allegedly stabbing his wife to death with a knife at  Ananekrom for cooking rice porridge instead of the his favorite ‘fufu’ delicacy.

The District Police Commander DSP James Ameka disclosed to OTEC News Kwame Agyenim Boateng that they identified the deceased as Gladis Oforiwaa who is  the wife of the suspect.

DSP James said incident according the information they gathered occurred in the late hours of Saturday May 16, 2020 about 09:00 pm  in the  Ananekrom Community.

He said a blood-stained kitchen knife was recovered from the scene and the suspect who tried to  run away has been apprehended.

He added that preliminary investigations have revealed that the incident was a result of a domestic dispute.

The 13 year old daughter of the deceased (name withheld) who is also a principal witness in the incident narrated that, her father (Joseph Pepreh) got angry after he found out that late Gladis Oforiwaa had prepared rice water, a delicacy he did not asked to for.

The situation according to her resulted to a fight between the couple when  the man allegedly stabbing his wife to death .

Gladis Oforiwaah who’s age is yet to be known had five children with the suspect and she’s also a native of Ananekrom in the As ante Akyem North district.