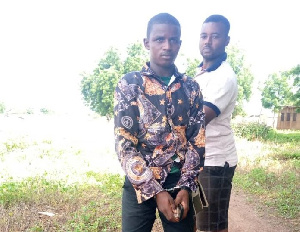 A 25- year-old man, Abdul Rahman Yahaya, has been arrested by the police for inflicting machete wounds on a farmer at Sumpini near Busunu in the West Gonja Municipality of the Savannah Region.

Narrating the incident to the media, the Assemblyman for the Busunu Electoral Area, Dari Osman Thomas explained that the victim, Ibrahim Habib, 27, had gone to attend to natures call at the outskirts of the village when he heard murmuring near the community borehole.

Upon reaching the area, he saw Rahman and another person, both herdsmen of Fulani origin who had travelled from Kunjipe in the Central Gonja District, having sex with two young Fulani ladies in the bush nearby.

A confrontation then ensued between the herdsmen and the farmer, culminating in the former inflicting machete wounds on the latter and bolting afterwards.

The second culprit, Mumin is, however, at large.

The arrested suspect is in police custody at the Damango Police station.