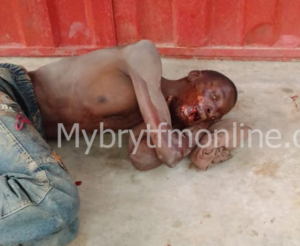 The Police in Adeiso of the Eastern Region is currently investigating an attempted murder of a man found in a near-death situation.

The man is currently in critical condition and had his tongue reportedly slashed and wounds inflicted on his face and jaw area.

Rainbow Radio’s Prince Collins Bening reporting on Nyankonton Mu Nsem said the man believed to be in his 30s is yet to be identified.

According to him, the residents who informed the Police of the matter suspects an attempted ritual murder.

The victim has since been sent to the Eastern Regional Hospital for medical care.

He was first rushed to Adeiso Health Centre but was referred to the Nsawam Government Hospital before he was finally sent to the Eastern Regional Hospital, our reporter added.