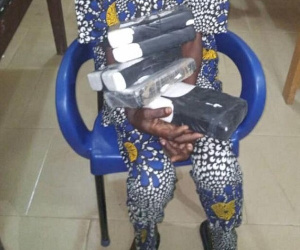 Police in the Ketu South Municipality in the Volta Region have arrested a man for allegedly possessing some five slabs of narcotic substances believed to be transported from Accra.

The arrest was made during one of the Police’s Patrol Duties on the Accra-Aflao highway on October 28, 2021, at about 8pm.

According to Deputy Superintendent of Police (DSP) Effia Tenge, the suspect, Adebayor Adesa Ako, was found with the concealed substances when the patrol team conducted its routine “stop and check” operation on a Toyota Siena commercial vehicle on which the suspect was aboard.

“When his luggage was searched, the police found five slabs of such substances [narcotics] which were wrapped, with which he was travelling,” she told journalists in twi, adding that the case has been taken over by the Volta Regional Police Command’s Drugs Law Enforcement Unit.