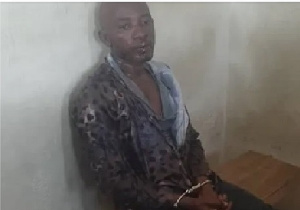 • Maxwell Boadi reportedly stabbed his wife to death on Saturday

• Deceased was three months pregnant at the time of her murder

A 40-year-old man, Maxwell Boadi, suspected of murdering his wife at Nyankyerenease, Kwadaso, a suburb of Kumasi on Saturday has been arrested.

A report by Graphic Online sighted by GhanaWeb said the suspect was arrested at his hideout at Kodie, a suburb of Kumasi in the Ashanti Region.

The suspect had been on the wanted list of the police after it was reported that he had allegedly stabbed his wife, Priscilla Owusu, 31, late in the night on Saturday and eloped after.

Betty was said to be three months pregnant at the time of her murder.

When police visited the scene on Saturday, a knife with blood stains was retrieved.

The late Priscilla Owusu aside from being pregnant also left behind two children.

It was reported that one of her children witnessed her mother being stabbed by their father and shouted for help.

Their landlady who barged into the room upon hearing the shouts met the unconscious body of Betty lying in a pool of blood.

The victim was rushed to the Okomfo Anokye Teaching Hospital where she was pronounced dead on arrival.

SAD PHOTOS: Security gunned down by robbers at Santase-Kokoben