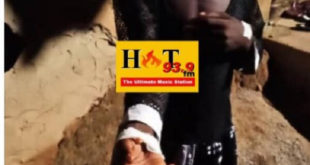 Woman inflicts blade wounds on daughter over GH¢20 in Shama

The Assin Fosu District Court has sentenced a 29-year-old auto-mechanic to one-year imprisonment for stealing four lines of rail tracks.

The tracks belong to the Ghana Railway Company at Assin-Fosu in the Assin Central Municipality of the Central Region.

Daniel Dadzie, alias Yaw Donkoh, was said to have stolen the four feet long pieces of the fixed railway metals, yet to be valued, and bolted on seeing the police.

He pleaded guilty and was convicted on his own plea by the court.

The prosecutor, Police Inspector Gilbert Ayongo told the Court that the complainants were members of the Fosu Divisional Police Command Patrol Team.

Prosecution said on Tuesday, April 21, at about 2:00am, the four-member night patrol team spotted the convict and his accomplice on a tricycle loaded with the pieces of the railway metals.

On seeing the police, his accomplice jumped off and bolted leaving the convict.

The police signalled the convict to stop but he disregarded the order and sped off through obscure routes to hide the tricycle and its content at Railway Station and bolted.

The police patrol team traced the tricycle to its location, impounded it and later arrested the convict who said he was hired by a certain young Rastafarian to cart them to an agreed upon location.