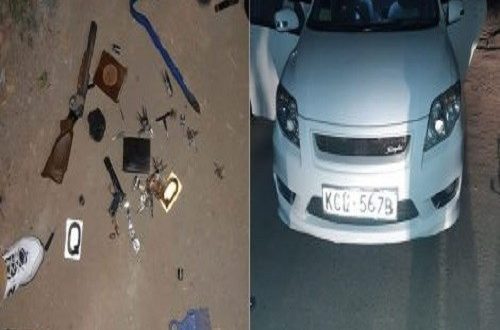 The victim, Taiwo Gbenga, reported to Kileleshwa Police Station that he had been robbed by four armed men who sped off in a white saloon car registration number KCE 567 B.

He told the officers that he was walking along Makueni road, within Kileleshwa area, when he was accosted before being robbed of two mobile phones, iPhone X max, Samsung Galaxy S8, a wallet containing his bank cards, driving license, alien card, special pass clearance, a wedding ring valued at Sh25,000 and a wrist watch.

Police say officers from Kileleshwa and Special Crime Prevention Unit (SCPU) were dispatched and combed the area and managed to spot the said motor vehicle along Nyando road.

A shootout ensued and two suspects were shot as their accomplices escaped with injuries.

Police managed to recover the motor vehicle, a Toyota Axio registration number KCE 567 B, whose number plates did not match those on the windows and insurance sticker.

Also recovered were a shot gun, an imitation of a pistol, two mobile phones, a claw bar, four master keys and seven bunches of keys, a gunny bag and a wrist watch.
The two bodies were taken to City morgue for identification.