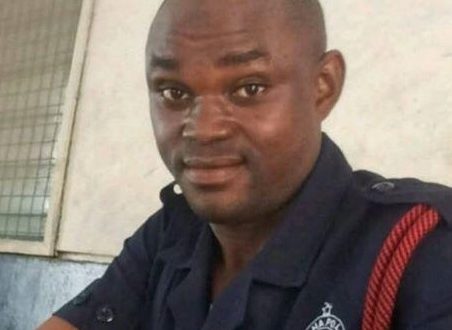 The mortal remains of Lance Corporal Mohammed Awal, one of the Kasoa Motor, Traffic and Transport Department (MTTD) policemen, killed while on duty on Wednesday August 28, 2019 at Kasoa Budumburam, have been laid to rest amidst wailing by family members at Abuakwa in Kwadaso Municipality in the Ashanti region.

It was a moment of grief when residents of Abuakwa and sorrounding areas trooped to the family house of the late police officer to mourn with the bereaved family amidst heavy military and police presence.

Otec news’ reporter Kwame Agyenim Boateng who is at the family house says the burial of late No. 49429 G/L/Cpl Awal Mohammed of Kasoa MTTD is in accordance with Muslim tradition.

According to Agyenim Boateng, the well attended burial service has witnessed scores of sympathisers pay their last respect to the late slainned officer amidst uncontrollable tears from the bereaved family.

COP/Dr George Akuffo Dampare, Director-General, Welfare of the Police Service is expected to be in Kumasi on Friday for the funeral.

Police call for help as two colleagues are gunned down

The Ghana Police Service is calling for public support following the killing of two police officers at Kasoa.

Director General of Police Public Affairs, ACP David Eklu encouraged the public, especially residents of Kasoa to remain calm and provide information to help weed out criminals in the area.

Sergeant Michael Dzamesi and Lance Corporal Mohammed Awal were on duty Wednesday afternoon when they were shot dead by some men in an unregistered vehicle at Buduburam near Kasoa in the Central region.

The two officers from the Kasoa Motor Traffic and Transport Department were said to be conducting road checks when the incident happened.

Chief of Gomoa Budumburam, Nana Kojo Essel II, has said his people are under self-imposed curfew due to persisted robbery attacks in the area.

According to him, the area allocated for refugees from Liberia is now a den for all manner of criminal activities.

A distraught Nana Essel told newsmen, Thursday said they are at their wits end following the murder of two police officers in the area.

He revealed how he is compelled to bury dead bodies on almost daily basis due to the increased criminal activities in the area.

“I have to bury dead bodies abandoned in the area. Most of the corpses have missing body parts, obviously they use them for ritual purposes,” he bemoaned.

All officers of the police Motor Traffic and Transport Department (MTTD) across the country will now be armed in a new move by the Ghana Police Administration to ensure the protection of its personnel who have recently come under attack.

Five police officers have been killed in the last 30 days, something that has brought to the fore, the issue of safety of law enforcers in the country.

“From today, we will give MTTD officers weapons,” the Inspector General of Police, James Oppong-Boanuh, announced Thursday, indicating it was a directive from the Interior Minister, Ambrose Dery.

Three arrested for killing 2 police officers near Liberia camp
He added that all police officers who go on ‘outside duties’ will also be armed with weapons, bullet proof vests and helmets to be able to “protect themselves whenever necessary because desperate situations call for desperate measures”. 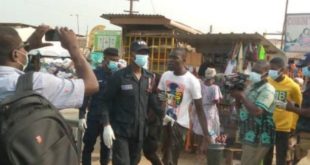