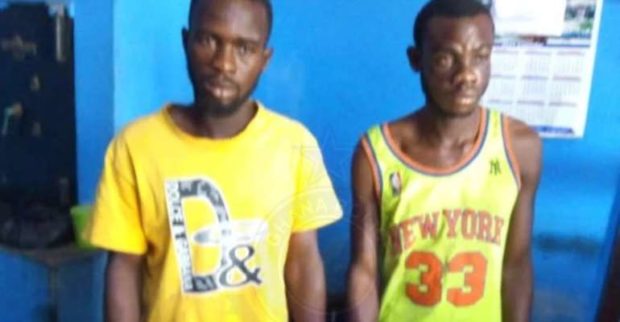 The Volta Regional Police Command has arrested two armed robbers who attacked and stole a motorbike from a resident at Tadzewu in the Ketu North Municipal Area of the Volta Region.

The suspects, Michael Maccatus, aged 31, and Wisdom Agbotokpo, aged 25 robbed a victim of his motorcycle after inflicting a deep slash on his head with a machete.

Following investigations and with the help of the people of Tadzewu, the robbers have finally been put in cuffs and will soon be arraigned before court to face sanctions in accordance with the law.

In a post on the official Facebook page of the Ghana Police Service, it has applauded the people of Tadzewu and urged the general public to always collaborate to get criminals behind bars.

“The Police Administration want to commend the people of Tadzewu in the Ketu North Municipal Area of the Volta Region for partnering the Volta Regional Police Command to arrest two armed robbers on Tuesday, September, 28th, 2021.

“As we commend the people of Tadzewu for their patriotic spirit and support, we encourage the public to continue to support us to make criminal activities unattractive,” the post on the Facebook page reads.