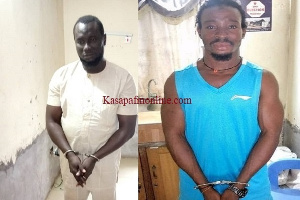 Two suspected armed robbers who had gone to the Mosque to pray after successfully robbing the Wapco Fuel station at Wiasi, a suburb of Kwame Danso in the Bono East region have been arrested by the Police.

The Suspects – Mustapha Selemana (27yrs) and Muali Seidu (42yrs) made away with an amount of Ghc 12,760 and also shot one customer who was at the fuel station to buy petrol.

A day after the suspects committed the crime, they went to the Mosque at a Community known as Shafa in the same district to pray.

The Atebubu Divisional Police Command in collaboration with the anti-robbery squad after picking up a tip-off about their whereabouts of the suspects quickly rushed to the mosque and surrounded it.

The suspects realizing that their end had come, then surrendered to the police who arrested them.

The Divisional Police Commander, ACP Samuel Alodey who confirmed the incident said the suspects are helping with investigations and will soon be arraigned before court.