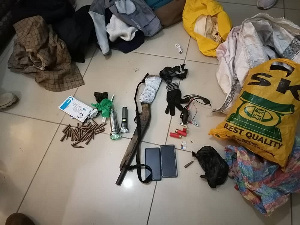 The Upper West Police Command has foiled a robbery attack at Varenpere in the Wa West District of the Upper West Region.

The Police said it picked intelligence on Friday, October 1, that some armed robbers were hiding in the bush planning an attack on commuters on the Wa-Wechau road.

As a result, the Police said it dispatched its SWAT team to the scene to face the armed gang of three.

“On 01/10/2021 about 1100hrs, Acting on intelligence gathered that three armed men were hiding in a bush at Varenpere, a village near Wechau in Wa West District preparing to rob commuters on the Wa-Wechiau road.

The Police narrated that the armed men immediately opened fire upon seeing the men in uniform of which they also returned fire.

The armed men, who the Police said sustained gunshot wounds however managed to escape the scene leaving behind their motorbikes, weapons, mobile phones, and other items.

The Police stated: “On seeing the Policemen advancing, the armed men opened gunshots on the police and police returned the gunshots.

“The three armed men who were also firing an AK 47 rifle managed to escape. They left behind Thirty-nine (39) Live AK 47 ammunition, one single barrel short gun with four live AA cartridges, two APSONIC motorbikes with registration numbers M-21-NR 5052 and M-21-NR 9505 with their ignition keys, one Techno Pop 4, cell phone, one Techno spark 5 cell phone, a dagger, a backpack, and some clothes.”

According to the Police, the suspects who they believed sustained gunshot wounds may be seeking medical treatment in any of the health facilities in the region.

In the light of this, the Police said it has informed all communities, Assembly Members, and health facilities to be on the lookout for people with such injuries.

“Messages have been relayed to all surrounding villages, including assembly members, all medical facilities, and herbal centers to be on the lookout and inform police of anyone who reports there with fresh injuries, especially gunshot injuries,” the Police noted.

It also asked local radio stations to relay the message to their listeners.