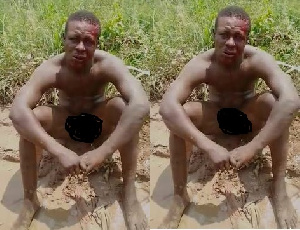 A 31-year-old notorious robber Amadu Yakubu was nearly beaten to death by angry residents at Kasoa Ofaakor after he and his colleague robbed a mobile money vendor.

Amadu and his friend are said to have stormed the victim shop, pulled out a broken bottle, and asked the victim to bring her money else they will kill her.

But the frightened victim shouted for help and drawing the attention of some youth around who gave the suspect a hot chase and succeeded in arresting him.

The youth beat the hell out of him and was saved from being killed by the timely intervention of the police who took him into their custody.

The Ofaakor District Police Commander DSP Samuel Amfoh confirmed the incident, adding that police have commenced investigations into the matter.