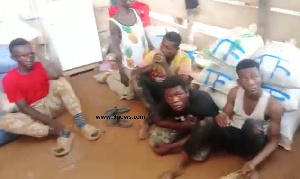 Six youngsters alleged to be residents of Effiakuma in the Effia Kwesimintsim Municipality in the Western Region have been arrested by the Adum Banso Unit Committee in the Mpohor District for attempting to sell a “stolen” taxi to an unsuspecting man in the area.

Narrating events leading to the arrest of the boys on Tuesday, August 31, 2021, government appointee at the Mpohor District Assembly Yaw Bernard stated that the six youngsters brought the car from Sekondi-Takoradi through Manso to ostensibly sell it to someone.

However, the man they approached to sell the taxi to became suspicious after they failed to convince him that indeed the car belonged to them.

“According to the man, when the youngsters, suspected to be aged between 16 and 19, brought the car which is a Taxi Renault, the number plate had been removed.

“They could also not produce any accompanying documents when he asked them. He said the man became more suspicious when he realised that there were no car keys and that the ignition had been tampered with. So, he quickly informed me and some young men around,” Yaw Bernard narrated.

He added that the youngsters could still not give any convincing story when they were subjected to further questions.

“So, I informed one Inspector Baah at BOPP about the youngsters. He came to pick them. But before that I ensured that no one laid a finger on them,” he said on Connect FM.

“This morning I called Inspector Baah and he told me that the owner of the taxi has been found. In fact, it came out that the taxi is a moving one and was parked at the May Spot around Fijai. But the driver came to see it missing and has even made a report.”

Yaw Bernard mentioned that the youngsters are currently being prepared to be transported to the Takoradi Central Police Station from the Mpohor Police Station.