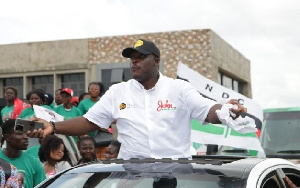 A man believed to be a spiritualist is in police grips for allegedly using the campaign posters of Member of Parliament for Ningo Prampram, Samuel Nartey George, for rituals.

It is not clear what the spiritualist’s intentions were but he was caught at the bank of the Volta Lake by some natives of Kpong.

The natives reportedly threw the posters into the lake after suspecting that the spiritualist was up to no good.

Reports indicate that the nabbed spiritualist is aiding the police with investigations.

In a Facebook post by the Member of Parliament for the area, he stated that he is not shaken by the incident.

“We serve a GOD who neither sleeps nor slumbers. No matter the schemes, physical and spiritual, we are unperturbed because of HE who has our back. #TeamDzata,” Sam George wrote.

In Ghana and other parts of Africa, spiritualists and occultists are usually consulted either to improve or destroy the chances of someone winning the elections.

The suspect is being processed for court but it remains unclear what he will be charged with.