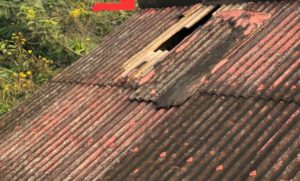 Information gathered by MyNewsGhana.net suggests that a convict Enoch Mamfe has broken out of jail at Adomi Senchi.

According to our sources, Enoch Mamfe broke out of jail through the ceiling and then destroyed parts of the asbestos roofing sheets of the washroom of the cell he was occupying and bolted.

Enoch Mamfe is said to have been convicted by the circuit court Krobo Odumasi for forty- eight months for stealing.

The run away convict is said to have been awaiting COVID 19 test results but has since bolted.

Th Police is a manhunt for him and is hopeful of apprehending him.

This is the second time in a week convicts have broken jail in the country.

MyNewsGh.com during the week reported a similar story of three convicts who were waiting for their COVID-19 results in Walewale but broke out of jail. The police officers who were in charge of the station have since been given ten days to find them.