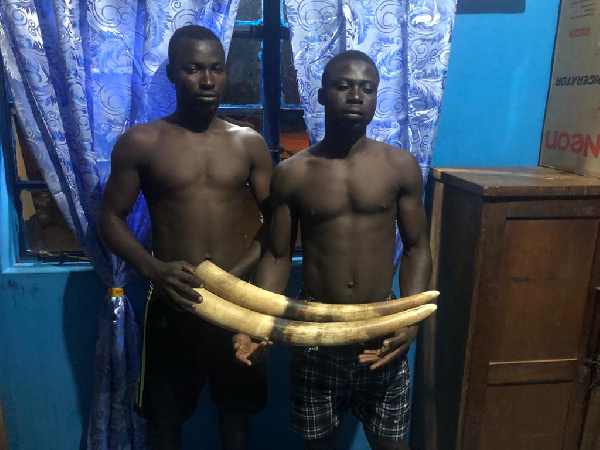 Two young men have been trailed and arrested at a Guest House in Damongo, capital of the Savannah Region on 14th August 2020 for attempting to sell Elephant tusks to a buyer.

27-year-old Abdul Latif and 24-year-old Abdul Rahaman Alhassan from the Larabanga community near the Mole National Park were arrested after rangers of the Mole National Park got a tip-off of their activities for a number of days before the arrest. The two were trailed to Damongo after a well-coordinated intelligence work, arrested at the guest house and then handed them over to the Damongo police for further investigation.

It is believed the two got the elephant tusks after poaching activities inside the Mole National Park.

The Manager of the Mole National Park Mr Ali Mahama declined to talk to Bole based Nkilgi FM because according to him investigations into the issue is inconclusive and that authorities at the park will brief the media at the right time.

The Mole National park is guarded by professional rangers, but notwithstanding this, poaching has been the biggest threat at the Mole National Park which is the largest in Ghana.

Poachers target elephants for their tusks and other animals for meat and officers who have encountered these poachers said they are armed with sophisticated weapons and mostly operate during the rainy season when the grasses grow thick to provide hideouts.

Poachers killed an officer at the park in 2002 and in March 2018 another wildlife officer the Park was shot dead by suspected poachers.

A wildlife census conducted at the Mole National Park on 2019 revealed that the park has a healthy and growing wildlife population capable of putting the country on the global map of great wildlife tourist destinations.

The census conducted from January to April 2019 by the Forestry Commission’s Wildlife Division, in partnership with a Namibian consortium comprising Bushskies photography and the Namibian University of Science and Technology, with funding from the European Union (EU) estimated that the elephant population of the Mole National Park was about 436.