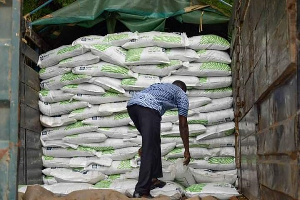 Two arrested in attempt to smuggle 1,000 bags of PFJ fertilizer

The Police in Navrongo have intercepted an articulated truck loaded with 1,000 bags of fertilizer being smuggled to neighboring Burkina Faso following a tip-off by the Bureau of National Investigations.

The bags, each weighing 50kg meant for government’s flagship programme, Planting for Food and Jobs, were being offloaded onto another truck for diversion on Thursday night but luck eluded the suspected criminals.

The police subsequently impounded the two trucks. One has a Ghanaian number plate with registration number AS 928–13.

Police have already taken statements from the consignee, one Aisha Ibrahim and the driver of the Ghanaian truck.

According to the Upper East Regional Minister, Paulina Tangoba Abayage “When the Police arrived at the scene, the culprits were removing the PJF (Planting for Food and Jobs) stickers on the fertilizer in Ghana registered truck before transferring them onto Burkina Faso registered truck.

She told TV3 [email protected] Friday evening that even carting the 50kg bags to Navrongo instead of the 25kg is a crime in itself, noting the difficulty government is going through to stop smuggling of fertilizers.

“They are criminals,” she said, ruling out any act of saboteur, “these are criminals who are clandestinely sucking the very blood that runs through the veins of Ghana, bleeding us to death.”

The minister applauded the security agencies in the region for the “huge support they’re giving me in this fight against the smuggling of fertilizer across to our neighboring countries”.

Madam Paulina Tangoba Abayage was emphatic that persons behind the smuggling “must be dealt with”.