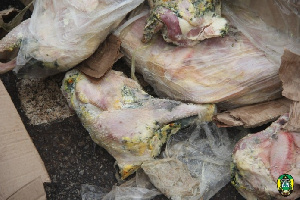 The Kumasi Metropolitan Assembly (KMA) has said its Environmental Health Department has doubled its effort to clampdown on the sale of any unwholesome food product on the market following the discovery of 15 cartons of rotten chicken meant for sale to the public.

The Public Relations Officer of KMA, Henrietta Afia Konadu, said the Food Hygiene Unit, of the Environmental Health Department plans on conducting a thorough search on cold store facilities in the metropolis, to see if there are any unwholesome food products being sold for public consumption.

The development follows the arrest of two persons by KMA Metro guards when they attempted to cart 15 cartons of unwholesome chicken at Adakwame Lorry Station around Mbrom, in the Kumasi Metropolis.

The rotten chickens were being transported by one Abiba and is believed was intended to be smoked or roasted for sale within Asuofua, Adakwame and Kejetia environs. One of the alleged suspects, Abiba has since led the Environmental Health Officers at KMA to arrest the operator of the cold store at the Asafo Market, where some more rotten chickens were discovered. The two have been sent to the Ridge Police Station for further investigations.

Meanwhile, according to the Public Relations Officer of KMA, the Police officers handling the case have said the suspects are being processed for court, while investigations continue to find out if there are more rotten chickens from the source where the products were transported to the cold store.

Speaking in an interview with the B&FT, the Deputy Director in charge of Public Health, in the Ashanti Region, Dr. Michael Rockson Adjei, noted that the consumption of wholesome products can lead to death among other health risks.

The consumption of unwholesome food products, processed or raw, results in food poisoning due to bacteria infestation, of the contaminated food item. This makes the food products detrimental to human health when it is consumed.

Dr. Michael Rockson Adjei also said: “the other side is that there is loss of nutritional value, as the food goes bad. Should one even escape the acute outcome like death or diarrhoea or the other effects, you may not benefit nutritionally.”

He therefore cautioned that while there are agencies like the Food and Drugs Authority, as well as the local assemblies that have the mandate to ensure that only healthy food products are allowed on the markets, the public should also be mindful of what they buy. “Individuals have their own duty to protect themselves while the regulatory agencies and assemblies continue to do their job.”

He entreated the public to pay attention to expiry dates on food items sold on the market as well as being mindful of the environment where they purchase or patronize cooked and uncooked foods.