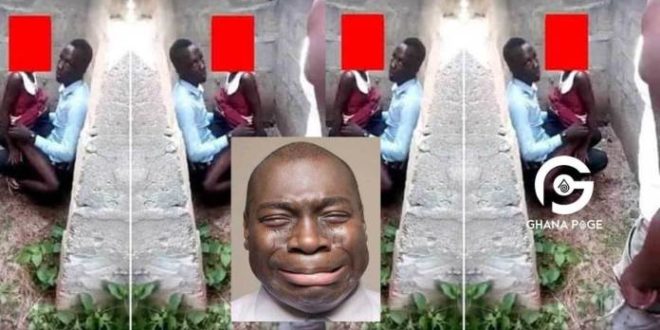 A video of a supposed Teacher in Komenda in the central region of Ghana penetrating minor in the corner of a bathhouse of an uncompleted building has hit online and fast going viral.

According to the man who finally caught the teacher in the middle of the act, he has been seeing this man often sneak off into the building from time to time habit he never paid much attention to his activities until yesterday.

Kwaku Bonsam, the old man who caught this man doing this abomination revealed the kid is just 13 years old when he questioned her.

In the video, he is seen squatting with his back touching one of the walls of the bathhouse within the building to give him the needed balance. The little girl sat on him while he did his own thing.

He begged the old man through nonverbal gestures and seems to be telling him something, however, his voice was faint. The gestures from the old man seemed to request the man to remove his manhood from the private part of the little girl.

This is very bad and the Ghana police and other government agencies under whose jurisdiction such matters fall must act now to help apprehend this alleged teacher no matter where he is in Ghana.