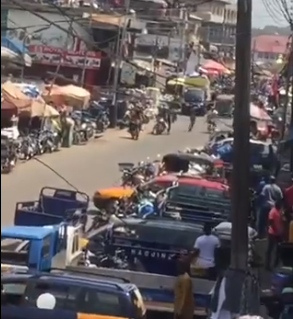 The gang, according to an eyewitness shot four persons killing two in the process.

“They shot like four people. Two of them are dead,” he added.

He described the assailants as robbers.

Traders at the business centre took to their heels to hide over fears of being killed.

“Four armed robbers hijacked the whole of Alabar. All of us run away from our shops. I haven’t seen even one police officer here,” the eyewitness said.