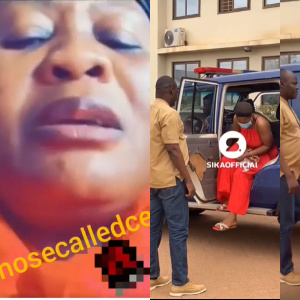 Social media went haywire on July 29, 2022, after it was reported that a young lady had stabbed her Canadian boyfriend to death.

Fast forward to August 1, 2022, a relative of the young man killed in cold blood has given certain vital information on the late Prince Osei Kofi.

He was allegedly stabbed in the neck and stomach multiple times by his lover.

According to a middle-aged woman who identified herself as the cousin of the deceased, the late Prince Osei Kofi travelled to Ghana with his son for his late sister’s funeral.

She added that he was the only son of his parents and, although he wasn’t married, he had children with several women and was always happy to take care of them.

She alleged the late Prince Osei Kofi was coerced and drugged before his demise when she got to know he was in Ghana.

The suspect, according to reports, was arrested by the Adenta police. She told the police that the act was in self-defense.

Watch the video that has since gone viral:

Previous Six Asante Kotoko legends who moved to the US after retirement
Next Akufo-Addo appoints Lariba Abudu as new Minister of Gender, Children and Social Protection