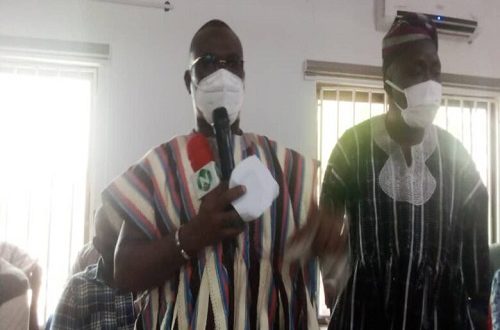 The Deputy Director for the National Disaster Management Organisation (NaDMO) in the Nabdam District has been murdered by three unidentified armed men in the Upper East Region.

The gruesome incident is said to have occurred at the Pelungu market on Saturday, February 27.

Mr Dominic Kulkong, 31, was shot during a transaction at a Mobile Money outlet in the area.

The Public Affairs Officer of the Regional Police Command, Assistant Superintendent, David Fianko-Okyere who gave a confirmation on the murder said the Police received a call reporting a robbery incident at about 7 pm on Saturday.

Upon arrival, he indicated that the robbers had escaped and made way with some 10 mobile devices and an amount of GH¢750 after raiding two shops at the Pelungu market.

According to him, from the accounts of witnesses, the NaDMO Deputy Director was shot while attempting to flee after being told to get down from a motorbike and lie on the ground.

According to him, the three unidentified men who were engaging in a Mobile Money transaction were left unattended by the agent after sensing danger.

Several hours later, Mr Kulkong who arrived to engage in a transaction met his untimely death.

Meanwhile, the remains of Dominic Kulkong has been released to the family for burial.

Previous PHOTOS: Neglected Kwame Nkrumah guest houses in ruins
Next Meghan accuses British royals of racism, says she was ‘pushed to the brink of suicide’