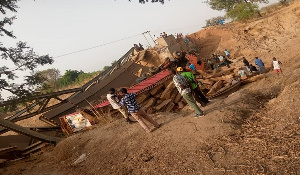 Residents of the Kassena-Nankana West District, who ply the Paga-Manyoro-Sirigu road, have been left stranded after the steel bridge at Paga-Navio collapsed, GhanaWeb’s Upper East Correspondent, Senyalah Castro, reports.

The truck, residents said, was returning from Tangasougo in neighboring Burkina Faso where it had gone to pick wood logs when the incident happened mid-journey into the steel bridge.

The bridge, which GhanaWeb in March 2020 reported is in a deplorable condition, succumbed to the weight of the heavily loaded truck and was crushed into the dry river along with the vehicle and logs.

The accident has caused movement on the road to stop. Many workers traveling the stretch are stranded. The majority are teachers and nurses traveling either way.

“I was going to work this morning when the incident happened. A vehicle that was carrying wood logs tried to pass on it and it collapsed. We are told the vehicle was coming from Tangasougo in Burkina,” Dennis, a teacher said.

“I will have to go back home and take a motorbike and pass through Pungu. It’s a long way but that is the only option available,” another teacher who begged anonymity, said. 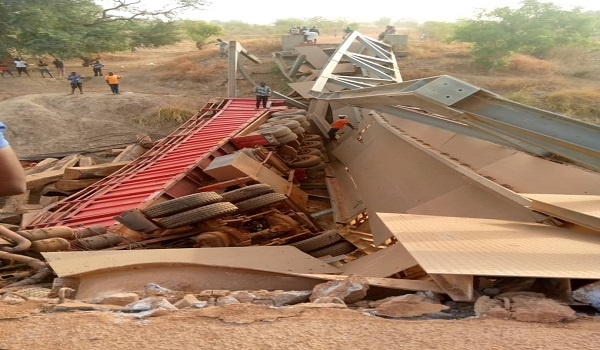 Prior to the collapse, residents and motorists raised concerns over the dilapidation of the bridge and appealed to authorities to renovate it.

The residents at the time said the old, deplorable bridge posed a threat to lives and property.

The worsening condition of the bridge and the poor nature of the Paga-Navio-Manyoro-Sirigu road even pushed the Chief of Navio, Pe Adam Kwarese II, and his people to march in the community in protest.

Pe Kwarase during that protest said his people were dying through accidents caused by the bad nature of the road. He also said the lack of culverts on the road caused farms in the area to flood as rainwater could not flow freely in the rainy seasons.

He made a passionate appeal to the government and local authority for assistance.

The District Assembly yielded to the concerns of the people and took steps to improve portions of the road. It also constructed culverts that addressed the flood issues. Movement on the road improved drastically.

As at the time of filing this report, the Motor Transport and Traffic Directorate of the Paga District Police command had been notified and were heading to the scene.

A team from the district assembly, led by the District Chief Executive, Gerard Ataogye, GhanaWeb gathered, was also en route to the accident scene to assess the extent of the damage.