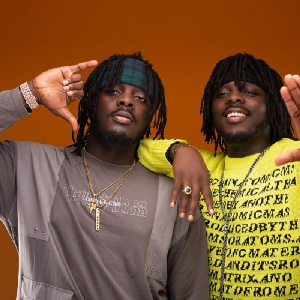 DopeNation praise Medikal for putting them on Tim WestWood

They recalled how Medikal placed a phone call to make it happen after they expressed in interest in appearing on the show.

“We just want the whole Ghana know say, this person inside Connect FM right now be very (very) dear to wanna heart… as we go London, we were like we wanted to link up with Tim Westwood, he just made a phone call and made it happen,” they said in pidgin, adding that Medikal really has a big heart.

The twins B2 and Twist called into the 971CountDown show on Takoradi-based Connect FM while Medikal was being interviewed by Ato Kwamina Otoo D’Gem, host.

In response, Medikal noted that it was important that as artistes, they supported each other.

Tags DopeNation FOR MEDIKAL on praise putting THEM TIM WESTWOOD