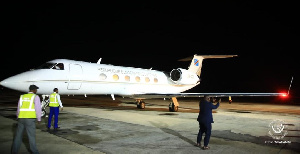 The Democratic Republic Of Congo, DRC, on Tuesday (November 9) welcomed back its official presidential jet to the country.

The Gulfstream IV jet had been seized in Spain as a result of unpaid maintenance invoices, the presidency said.

The official Twitter handle also shared photos of the white jet which had the country’s name and flag when it arrived in the capital, Kinshasa.

“After 5 years of forced immobilization in Spain due to unpaid maintenance invoices, the Gulfstream IV presidential plane flying the Congolese flag returned to the country on Tuesday evening,” the accompanying text read.

In another post, they stated how the retrieval of the jet came about: “On the instructions of President Tshisekedi, his Chief of Staff, Guylain Nyembo, set up a working group including presidential logistics to manage this file.

“The invoices having been honored, the facility was returned to the DRC and the country’s honor is safe.”

Impounded in 2016 means that it was taken during the era of Joseph Kabila whose mandate expired in 2016 but was extended by a court till 2019 when he stepped down after over two years as ‘caretaker’ president.