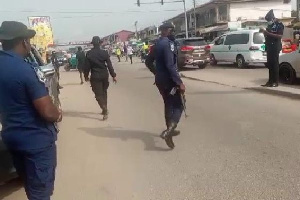 Police took the swift intervention of the Central East Regional Police Command to restore order at Kasoa after chaos ensued over the strike action by private commercial transport unions across the country.

The Kasoa Central Business District was plunged into disarray when some drivers attempted to compel their colleagues operating ‘troskis,’ tricycles and motorcycles (okada) to comply with the nationwide strike action.

Some aggrieved drivers blocked the roads with car tyres, cement blocks and logs to prevent the passage of commercial vehicles with passengers on board, causing heavy vehicular traffic.

The irate drivers aggressively hit vehicles loaded with passengers with their hands and in some cases, forcibly opened the doors in attempts to get the passengers out.

Two sprinter bus drivers from the Kasoa main lorry station with registration numbers GW 6383–21 and GX 9900–13 had their headlights broken for defying the strike action.

Chief Supt Dassah said the drivers had no right to punish all road users because of a misunderstanding with their leadership.

The GNA observed that some of the drivers were happy about the strike action to put pressure on the government to review the fuel prices, which they said was killing their business.

Some of them were seen playing football at the lorry station to entertain themselves at the expense of the stranded passengers.

The strike action resulted in the grounding of vehicles, including long-distance ones and taxis, leaving passengers stranded.

Mr Masawudu Alhassan, the Kasoa Branch Chairman of the Ghana Private Road Transport Union, said the strike action would continue if they did not hear any positive news from the national leadership by close of Monday.

“The drivers are not asking too much, just a reduction in the taxes on petroleum products,” he said.

“There is a percentage of taxes on the fuel and if it is removed, we will be fine. For now, we are waiting on our leaders to give us the order to move our cars.”