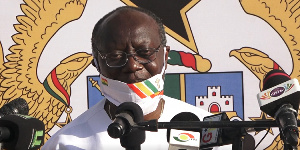 Parliament suspends sitting to allow for broader consultation on e-levy

The Majority caucus in Parliament has stated that the controversial electronic transaction levy otherwise known as E-levy will eventually be passed despite the strong opposition by their colleagues on the Minority side.

In an interview on state broadcaster, GBC Breakfast Show on Thursday January 6, 2022, deputy Majority Chief Whip, Habib Iddrisu indicated that the majority was readying itself to pick up from where it left off on the bill in 2021.

He intimated that Ghanaians were already paying taxes on electronic transactions but revenue generated was not accrued to the state.

Habib Iddrisu stressed that the passage of the E-levy bill will rather help accrue more revenue to country.

“The E-levy when we come back to parliament…we only adjourned and it was in form as it was when we adjourned, when we come back, the majority side and the leader of government business who’s the Majority Leader will look at how government business will go and we will table it…the E-levy as I have said is part of the budget that has been approved, it is part of the appropriation that has been approved and part of revenue target. It will happen,” the MP for Tolon said.

Ken Ofori-Atta at the presentation of the 2022 budget announced government’s intention to slap a 1.75% charge on all electronic transactions including mobile money.

But the minority insists that the “draconian tax” will impose severe hardship on Ghanaians.

A vote at the plenary level of considering the bill turned chaotic as parliamentarians threw punches at each other.

This followed a disagreement on whether to allow First Deputy Speaker, Joe Wise – who was presiding at the time – to participate in the voting process.

The voting began with each MP on the majority side name being mentioned and counted but chaos broke out on the floor of parliament when Joe Osei-Owusu attempted to give way to Andrew Asiamah to take over proceedings to enable him cast his ballot.