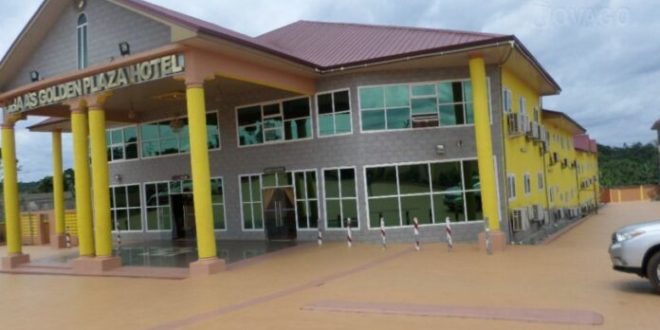 The Electricity Company of Ghana (ECG) has disconnected power to Obaa’s Golden Plaza, a hotel located in New Abirem in the Birim North District of the Eastern Region over power theft.

ECG disconnected power supply to the facility after detecting an illegal meter bypass at the hotel on Thursday July 21,2022 during a surveillance by the Loss Control Unit.

The hotel was subsequently surcharged GHø58,544.41, being the cost of energy recovered from the illegal connection.

The surcharge in addition to the unpaid bills of the hotel will amount to GHc546,268.18 which according to ECG, must be paid in full before power will be restored to the hotel.

The discovery of the illegal connection came a day after the Company had extended a one-month moratorium to its customers who have indulged in any form of illegal activities to own up and visit the ECG offices for amicable settlement to avoid prosecution.

The General Manager of Eastern Region ECG, Ing. Michael Baah, who made this known in Koforidua on Monday July 25,2022 said the Company will not relent in its efforts to chase individuals and organisations that have engaged in illegal connection in the region.

According to him, the Revenue Protection Unit in the Region, has the mandate to inspect all meters in the region to expose illegal power consumers for naming and shaming.

“This should serve as a warning to all those who have indulged in any form of illegality. We are coming for you.There is no way you can escape our radar, and once you are arrested, we will hand you over to the law enforcement agencies for prosecution”, He added

The Minister of Energy Matthew Opoku Prempeh revealed in May this year ago during the ministry’s ‘meet the press’ program that ,Technical and commercial losses of about GH¢3.2billion are threatening the future of state-owned power distributor -the Electricity Company of Ghana (ECG).

The company’s losses in then exchange terms amounted to US$400million accumulated from power theft, malfunctioning metres, obsolete infrastructure, ineffective revenue collection, among others.

The minister lamented: “Which company can be viable if it loses that amount of money? Power theft – those who are stealing power, those whose metres are not working and those who don’t have metres but have electricity – is costing ECG nearly GH¢3.2billion,”

Previous The party that will lose 2024 polls will stay in opposition for 29 years – Apostle Kwabena Adjei
Next ‘Never love a guy from Tema, you will regret it’ – Efia Odo