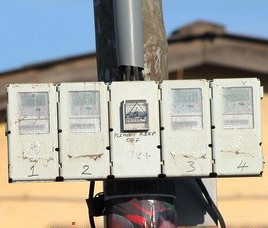 The Electricity Company of Ghana (ECG)in the Eastern Region has retrieved about GH₡949,000.00 from detected illegal connections in the Region last year.

The amount represents penalties and surcharges slapped on customers who were caught using electricity illegally in the year 2019.

He explained that the types of illegal connections detected include; Meter tampering, Meter By-pass, illegal self-reconnection and illegal direct connection.

According to Mr. Ofosu Amankwaah, the Revenue Protection Unit of the ECG in the region on their monitoring exercise visited 4,014 meters last year and detected 16 unauthorised service connection, two illegal direct connection, 29 meters tampered, 176 faulty meters and 111 meters on wrong tariff class. “Meters that were identified to be on wrong tariff classes were corrected and the identified faulty meters replaced”, he added.

Mr. Ofosu Amankwaah stated that through the monitoring exercise, ECG was able to recover about 1,196,681KWh units of electricity which were lost through illegal connections and that the total units recovered translated into GH₡1,203,878 of which an amount of GH₡949,116 has been retrieved from customers.

The Regional General Manager of ECG, Ing. Michael Baah stated that the Eastern Regional Office of ECG has initiated series of revenue protection activities aimed at unearthing illegalities in the system and reducing power losses due to power theft. “If we are able to reduce commercial losses, we could achieve the system losses benchmark of 20 per cent by the end of the year 2020”, he said.

Ing. Michael Baah stated that it is a crime to steal power and that customers who are caught in such acts would be prosecuted. “Anyone found culpable of illegal connection will face the law” he added.

He, therefore, cautioned customers to desist from illegal connection and endeavour to pay their bills.