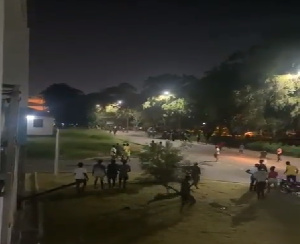 Some residents from the Commonwealth Hall and the Mensah Sarbah Hall at the University of Ghana clashed over delays in the release of the final results from the Students Representative Council run-off elections.

The residents from the two halls threw broken bottles and stones at each other in front of the SRC Union Building.

The 2021 Student Representative Council (SRC) presidential race was pushed into a run-off following the inability of the four presidential candidates – Samuel Amos Ofosu, Priscilla Asantewaa Ayeh, Felix Ayittah, and Prince Asumadu – to secure a fifty percent plus one vote as stipulated in the UGSRC constitution.

The election was held partly in person and online due to the modular system of learning adopted by the university after the covid-19 pandemic.

Provisional results from polling stations in various halls were announced earlier and showed Prince Asumadu and his running mate, Wisdom Ndukwe were ahead of their opponent.

The online election where over 7,000 students voted, however, had not been released at the time the violent clash occurred.

Supporters of both candidates had gathered in front of the SRC Union Building where collation and declaration of results are done. Amid singing and chanting in anticipation of the declaration, the groups clashed, resulting in the pelting of stones and bottles.

Due to the nature of the clash, the police were called to help maintain sanity.