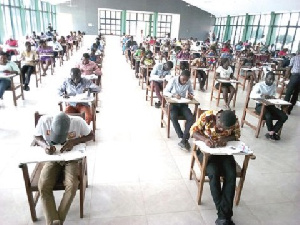 The Deputy Eastern Regional Youth Organizer of the National Democratic Congress (NDC) Mr Richard Nyarko said if the NDC wins the 2020 elections, they will cancel the teacher’s licensure examination.

He explained that the party did not see the licensure examination as necessary as it reduced the number of qualified teachers that the government had to employ.

Mr Nyarko said the NDC government would complete all the Day Senior High Schools (SHS) and open schools in new communities across the country and create more avenues for employment of teachers and raise the necessary budgetary allocation to pay them.

He was speaking at the Youth Speaks Forum organized by the Ghana Centre for Democratic Development (CDD)in collaboration with Youth Bridge Foundation, a non-governmental organization with support from the USAID at Koforidua in the Eastern Region.

He said the NDC government would revive the Kumasi Jute bag factory and the Komenda Sugar Factory to create more jobs for the youth.

Mr Nyarko said they would also establish skills development centres to train the youth to acquire employable skills for themselves and others.

He said the future NDC government would introduce free technical and vocational training for the youth from the SHS to the tertiary level to help develop the requisite technical skills for the development of the country.

He said under the one district, one factory programme of the government, 58 new factories were in operation and created jobs for the youth in some districts in the country.

Mr Osei-Poku said the NPP government had employed over 8,872 teachers, 1,445 non-teaching staff, over 54,000 nurses, 1,174 health assistants within the three and half years in office.

He said 1,535 jobs were created for the youth in cocoa production, 83,000 youth employed under the Forestry Commission and funding was provided for establishment of 9,350 new businesses.

Mr Osei-Opoku said government had introduced free SHS policy to ensure that more Ghanaian youths got secondary education and supported the system with scholarships for over 30,000 youths.

He said a future CPP government would increase the share of the District Assembly Common Fund for People With Disability (PWD) and introduce free education for children of PWDs.

He said a future CPP government would develop sports as a form of recreation and a means of creating jobs for the youth.

Mr Francis Cobbah, the New Juaben South Municipal Director of the National Commission of Civic Education (NCCE) advised youth organisers of the political parties to educate their members to desist from political violence.

Ms Regina Oforiwa Amafo of CDD called on the youth activists to use their abilities positively for the development of the country.

Ms Joyce Nyame, the Programmes Coordinator of the Youth Bridge Foundation called on the political parties to place high emphasis on the development of the youth of the country.

The Ball Is On Your Court To kick And score; Makes Us Proud – KMA To WASSCE’s Candidates