Connect with us
For 20-year-old Emmanuel Oduro doing odd jobs to fund his education is the best alternative.

He started paying tuition after passing the West African Senior School Certificate Examination (WASSCE), worked as a labourer at a brick kiln and as a cleaner at a bank in Kumasi, the Ashanti Regional capital. His mother, who is a petty trader, earning ¢200 a month had supported Emmanuel, too.

Aspiring to become a university professor, Emmanuel’s dream of studying in a premier university came true in 2020 when he was selected for a Bachelor’s Degree course at the Kwame Nkrumah University of Science and Technology (KNUST).

‘Only option is to quit studies’

However, for about a month now, Emmanuel, who stays off-campus, has been among hundreds of KNUST students protesting against an increase in their hostel fee and other charges, which he fears might force him to quit his university course.

Currently students pay approximately ¢2,000 to ¢5,000 as hostel fees per semester. If owners of these private hostels go ahead with another increase that figure could go up to ¢10,000.

“I can’t afford to pay more as my hostel and mess charges. If the order is not rolled back, the only option before me is to quit studies,” Emmanuel told dailymailgh.com.

On Friday, as hundreds of KNUST students were preparing to march to the Rent Control Department at Amakom in Kumasi, they were initially stopped by armed police officers. Others vented their anger on social media platforms with a campaign dubbed; #FixHostelFeesNow.

The placard-wielding protesters who have formed the Concerned Students of KNUST, later marched to the office of the Dean of Students to present a petition to management.

The students said any hike in their fee would mean a direct hit on those coming from underprivileged backgrounds.

“The self-actualization of individuals through education must not be compromised, much less to the exploitation by capital extremists all in the name of the free market. This is not just an economic challenge, but an issue of Human Rights”, parts of a petition addressed to the Dean of Students at the KNUST read.

In a statement, the management of the University agreed with the students that the recent hikes in hostel fees were excessive.

“Our investigation shows that indeed some private hostels, off-campus, have increased their rentals between 20% and 94%”.

The university also said the hostels in question do not belong to the Private Hostels Association (PHA) recognised by the university.

“This notwithstanding, the Office of the Dean of Students has identified those specific hostels and have started engaging them on the possible reduction of same,” the school said.

According to the management of KNUST, hostels under the PHA “have increased their rentals not exceeding 12% as agreed with the University.

”To find a lasting solution to the accommodation challenges, the school’s management said discussions are ongoing with three private investors for the construction of hostels beginning next academic year.

“Management wishes to assure the general student body and the public that every effort is being made to provide decent and secure accommodation for students on campus.” 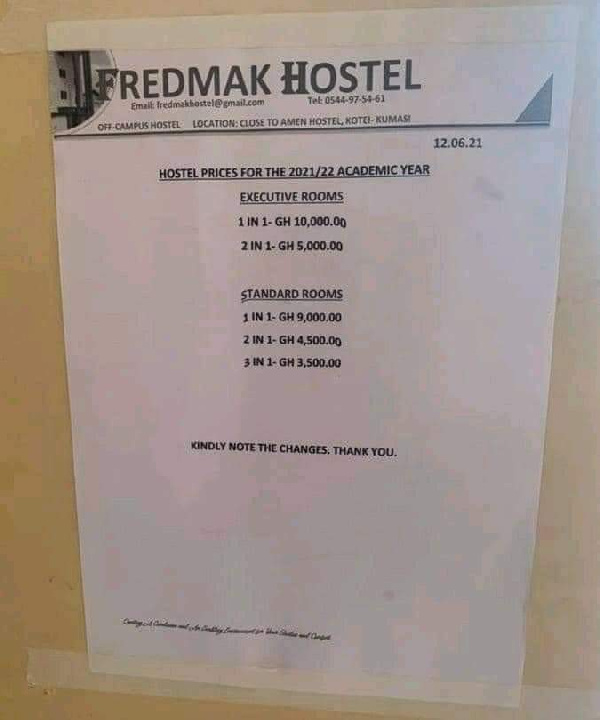