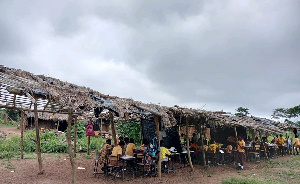 Pupils of Abansere Basic School in the Berekum West District of the Bono Region currently have classes under harsh and unfavourable conditions due to the absence of befitting classrooms.

Pupils from classes two, three, and four learn under a shed that was constructed by the school with the support of the community.

Sadly, the shed is now in a deplorable state with almost the roof ripped but pupils still learn under it at the mercy of the weather.

With an enrolment of over two hundred pupils, the school can only boast of a three-unit classroom block that was constructed by the Rotary Club Ghana for the community in 2018 to support teaching and learning.

Although the well-furnished three-unit classroom block accommodates pupils from Kindergarten to class one, the story is different for pupils in the other classes as they continue to have classes under deplorable conditions.

Despite the setback, teachers in the school still commute from Jinijini, Berekum, and other nearby towns to render diligent services hoping for a turnaround for pupils in the school.

According to the Assemblymember for the area, Oppong Tia Samuel, the current situation does not promote effective teaching and learning as there are several distractions.

He tells Ghanaweb that the shed under which the pupils learn is not only dangerous to their lives but shameful to the dignity of the children.

He reveals that, aside from that problem, pupils from class five up to the Junior High School level trek every day to Jinijini which is about 15 kilometres away to access education.

“The Abansere Basic School is in distress and needs immediate attention if we want to promote effective teaching and learning because the shed they have classes under is not fit for that purpose. Another problem we have is that other children walk to Jinijini because the school here is up to class four”.

Also, the headteacher of the school, Febiri Micheal, recounts instances where they have to close school anytime it rains and has appealed to the general public to help them to at least put up a pavilion. 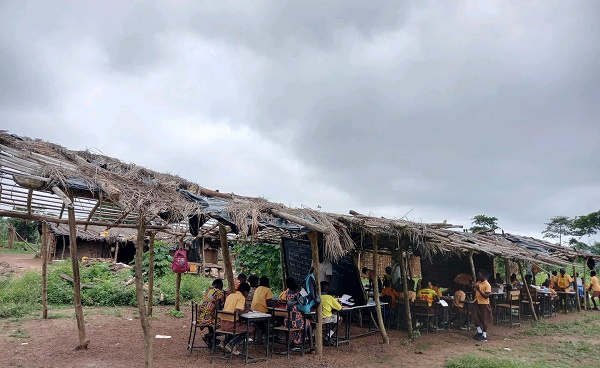