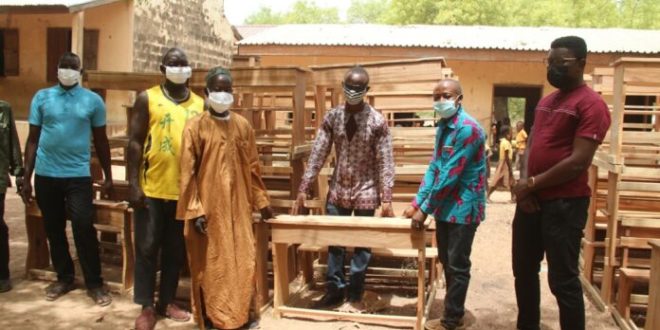 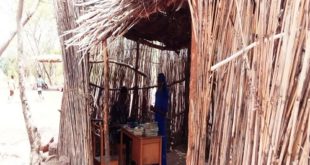 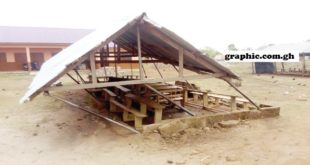 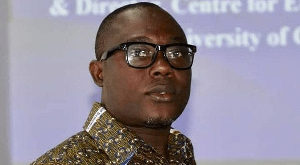 A public school in the Upper East Region, where schoolchildren sit on the floor to learn for lack of furniture, has received 81 dual desks after a teacher made the children’s ordeal public through social media.

A number of entities donated the writing desks to the Naaga Primary School after spotting Desmond Kampoe’s Facebook and WhatsApp posts about the deprived school.

Officials from the Ghana Education Service (GES) joined traditional authorities at Naaga, a community in the Kassena-Nankana Municipality, at a ceremony organised on Wednesday to officially present the furniture to the school.

“Notable among these people (the donors) are Mr Sellah and his friends who supported us with 30 dual desks. Technology Beyond Borders also supported us with 51 desks. Friends and other acquaintances supported me in carrying the furniture from Tamale, because it was constructed over there, to this place. In fact, it hasn’t been easy. It’s been challenging.

“But I’m very thankful to God that the problem has been solved now. When the story broke, Dr Julius Awini was the first to respond, with the speed of light. He actually responded with 95 dual desks. When the furniture came, it became a sort of motivation for these kids. And so we started getting full-class attendance. It has helped so much and I’m happy that this problem has been solved,” Kampoe told a crowd at the event.

Furniture deficiency reportedly had been a chronic challenge at that basic school before Kampoe arrived there in September, 2017, to work as a teacher. He started the furniture campaign in November, 2019. He, however, apologised at the donation ceremony to anyone who might have felt offended by his idea of going out of the ‘conventional’ way to provide the needy children with furniture.

“And thank-you to all the friends who shared that post. You have really helped us. My sincerest gratitude to you,” he added.

The school’s classroom block needs rehabilitation. That need has been left on the shelf because the school has not received Capitation Grant for some time, according to management.

“We have so many challenges. You can see as the block is very bad. The window and the doors are removed. That did not happen just yesterday; it happened so many years ago. Unfortunately, we don’t have the necessary funding to maintain the broken parts. We haven’t gotten Capitation Grant for some time. So, because of that, work on rehabilitation has come to a standstill. More to the point, the location of the school is within the community. You can see the land is being encroached by certain settlers. You see a church just closer like this.

“This is supposed to be a school compound. If you go to the other side, you will see somebody who built there. We reported to the chief and he came in to get the person move because that was certainly the school land. Then, the textbooks, the teaching-learning materials that we are supposed to use, are not there. New curriculum without textbooks here. Anybody who wants to donate can look into such areas,” said the school’s Head-teacher, Robert Ayesiyinga.

He said the school also lacked hexagonal tables and mini-chairs for the children at the kindergarten level and it had no furniture for its teaching staff except some five inadequate plastic chairs and tables donated by the Parents’ Association for the staff to make do with.

On the furniture donation facilitated by the teacher, the head-teacher said: “The donation is really timely because it comes to help curtail certain situations that we were facing. Now, when we use these desks, we will have space to be able to distance a bit in terms of the children, unlike those days that the children were lying on their bellies to write. Within two days, their uniforms would get dirty, because they were lying on the floor.” 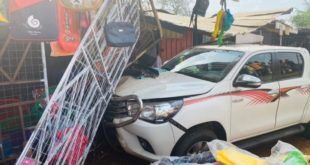 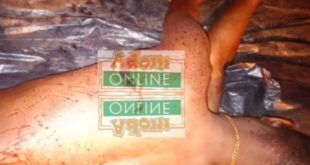