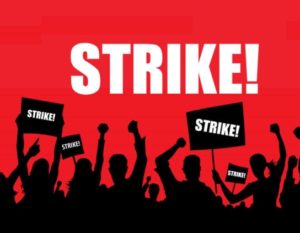 The Ghana Association of University Administrators (GAUA), has served notice it will embark on strike beginning June 4, 2021.

The industrial action according to the group, will be in force if the Finance Ministry halts the payment of allowances to some of its members who have been described as “unqualified office holders in the public universities”.

GAUA in a statement argued that despite petitions to the Ministry of Finance, the Ministry is still going “ahead to withdraw the allowances of members who were legitimately appointed to head offices through no fault of theirs to be unfairly treated this way”

“It is in this regard that we write to notify your outfit of intention to embark on an industrial action if the Ministry of Finance through the Ghana Tertiary Education Commission and the Vice Chancellors Ghana proceed to implement the directive without addressing our demands as contained in several communications on this matter”, portions of the statement added.

The group pointed out that the officers of the grade of Assistant Registrars or their equivalents are fully qualified in running universities for years, thus it is unfortunate to be tagged as unqualified to be denied allowances.

According to the Association, the non-payment of the allowances would have dire consequences on the affected persons.

“No amount of justification for the immediate stoppage in this critical period can suffice”, the statement further added.

Senior staff of universities to strike over ‘unfavourable’ conditions of service
The intended strike by the universities administrators come shortly after the Senior Staff Association of Universities of Ghana also threatened an indefinite nationwide strike from Tuesday, May 18, 2021.

The Senior Staff explained that the decision follows the government’s failure to address the concerns of its members after they called off a similar action early on in the year.

It comes on the back of the government’s inability to pay the tier-2 pension arrears, market premiums, and non-basic allowances of members.

In an interview with Citi News, the National Chairman of the Association, Mohammed Zakaria, said the government has consistently failed to address their concerns despite earlier promises.

“We submitted our letter of intent to the National Labour Commission (NLC) on the 7th of this month, but we have not heard anything. We have been disappointed so many times. This strike will hold till our demands are met.”

School for the Blind Students demand removal of Headmistress