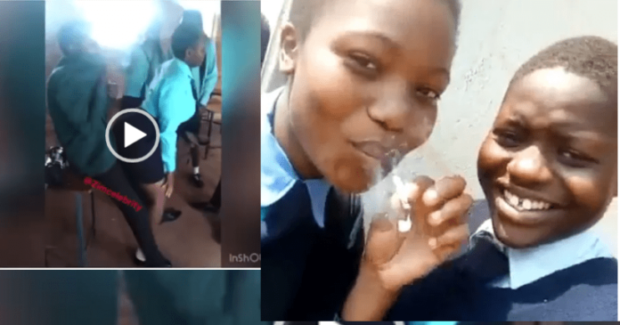 Secondary school is the one the stages of education, that enables the young generations to express their youthful Age and juvenile delinquent stages. It is during this stage of academic level that a student is being thought, on what he or she is likely going to face in the High institutions.

And what you learn in your final year in secondary school, is what we be used to teach you some topics in the University. So you need to focus more and study your books during these stage.

I was strolling down the internet when I came across some pictures online, which was gotten from a video footage on the internet. It was some pictures of some students, (both Males and females), who turn their classroom into a brothel, smoking weed and dancing explicitly.

As it has now become a new trend were students are being accused, of turning their classroom into brothels of sorts, while their teachers continue boycotting class.

According to the information gathered by the source, there is a clear indication that the video has circulated on internet, we’re pupils were seen doing drugs, dancing dirty and engaging in other illicit activities with their school uniforms on.

Adding that they eve dare revised the video and share it online. As some some students were smoking marijuana, some were whining, others turned their classrooms into brothels.

According to the report provided by the source, these students were not scared or bothered over what the internet, and social media users will react over their video, and still went ahead to post the video on internet. As most of them were seen whining and having fun.

What is your consideration over these, do you think that the government should punish them for this, or have them arrested for turning their Classroom into a brothel.

As teachers continue boycotting class, a new trend has emerged amongst students who are being accused of converting classrooms into ‘brothels’ of sorts. pic.twitter.com/n1YJjbUNhn