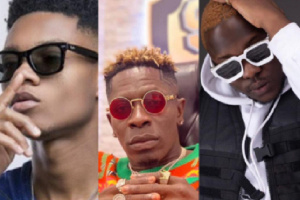 It has been a ‘money-making’ year for some Ghanaian musicians as through the use of TikTok they have managed to spark trends with their music and catapult them onto the charts.

The app has become a monstrous force in the Ghanaian music industry by influencing mainstream music in a way that few platforms ever have.

Several Ghanaian musicians in their quest to benefit from the TikTok’s algorithm, which is highly influential create a dance or singing challenge or even sometimes pay influencers to feature a song on their pages.

By so doing, they boost their reach to millions of users.

With that being said, let’s take a look at some Ghanaian artistes and their songs that have been used for various #challenges on TikTok

Released in December 2020 and meant to be a Christmas song, ‘This Year’ has not lost its relevance till date because many Tiktok users participated in its dance challenge.

Using the #thisyear, millions of users created their renditions of the song thereby boosting its reach.

This particular song has topped various charts and currently has close to a million views on YouTube.

Perhaps this song blew heavily because the TikTok star ‘Hajia Bintu’ herself was featured in it.

In just a span of one month, this particular video has clocked 2 million views and counting on YouTube.

The SM boss’s huge fanbase on TikTok started the #Hajia Bintu challenge which was spread across other social media platforms.

Many individuals including celebrities have participated in the #yeeko challenge which first started on TikTok.

Released about three weeks ago, the song has more than half a million view on YouTube and has topped several Ghanaian music charts.

La hustle is arguably one of the most popular songs in recent times and this is as a result of how well Ghanaians embraced it.

Apart from its catchy lyrics, the song is also relatable.

These factors compelled a lot of Ghanaians to participate in the #lahustle challenge which first started on Tiktok and was spread across other social media platforms.

The song which was released in September 2020 is still topping charts and has 1.9million views on YouTube.

Even though it was released 8 months ago in May 2020, this particular song is still breaking both local and international charts.

‘Say Cheese’ was released during the lockdown and as such, necessitated its patronage on TikTok and several other platforms.

Its large popularity sparked a remix with American singer Teddy Riley and with this feature, it has debuted number 15 on Billboard’s newly curated charts.

The song currently has close to 4millon views on YouTube.

SAD: Full VIDEO of how Ama Broni Fell from Stage pops up